Part of a series on quantitative models for cause selection.

One major reason that effective altruists disagree about which causes to support is that they have different opinions on how strong an evidence base an intervention should have. Previously, I wrote about how we can build a formal model to calculate expected value estimates for interventions. You start with a prior belief about how effective interventions tend to be, and then adjust your naive cost-effectiveness estimates based on the strength of the evidence behind them. If an intervention has stronger evidence behind it, you can be more confident that it’s better than your prior estimate.

For a model like this to be effective, we need to choose a good prior belief. We start with a prior probability distribution P where P(x) gives the probability that a randomly chosen intervention1 has utility x (for whatever metric of utility we’re using, e.g. lives saved). To determine the posterior expected value of an intervention, we combine this prior distribution with our evidence about how much good the distribution does.

The first question we have to ask is what probability distribution describes the space of interventions.

I see three reasonable ways to figure out the distribution:

Interventions seem to have the general property that there are a lot that have little to no effect per dollar spent, and few with large effects (as GiveWell claims here and here). In particular, the probability of finding an intervention with impact X utility diminishes as X increases.

The two most reasonable-seeming distributions with this property are the log-normal distribution and the Pareto distribution2. These are by far the most common distributions that are unbounded and have long tails. If I were being more thorough I would more seriously investigate other candidate distributions, but some brief research suggests that there are no other strong contenders.

Let P(x) be a probability density function where x is a level of impact (described as a numerical utility) and P(x) gives the probability density of interventions at that level of impact. The Pareto distribution has the property that if P(x)/P(2x) = k, for some constant k, then P(ax)/P(2ax) = k for any coefficient a. This sounds like a reasonable property for the space of interventions to have.

Examples of real-world phenomena that follow a Pareto distribution include word frequency, webpage hits, city populations, earthquake magnitudes, and individual net worths3. The distribution of interventions feels qualitatively similar to these in a way that’s hard to describe. On the other hand, I don’t know of a mechanism for generating Pareto distributions that could plausibly generate a distribution of interventions (see Newman (2006)3). It seems more plausible that interventions could be modeled as a natural growth process (although I haven’t thought about this much and I’m not exactly sure how this model fits). Additionally, many data historically believed to follow a Pareto distribution were later shown to be log-normal4. A log-normal distribution describes such data as the lengths of internet comments, coefficients of friction for different objects, and possibly individual incomes.

How can we empirically observe interventions’ impact? Can we do a good enough job to get a strong prior?

I attempted to estimate what the distribution looks like by examining the list of cost-effectiveness estimates published by the Disease Control Priorities Project. The interventions (measured in dollars/DALY) follow an exponential curve along the range [10^0, 10^4]: 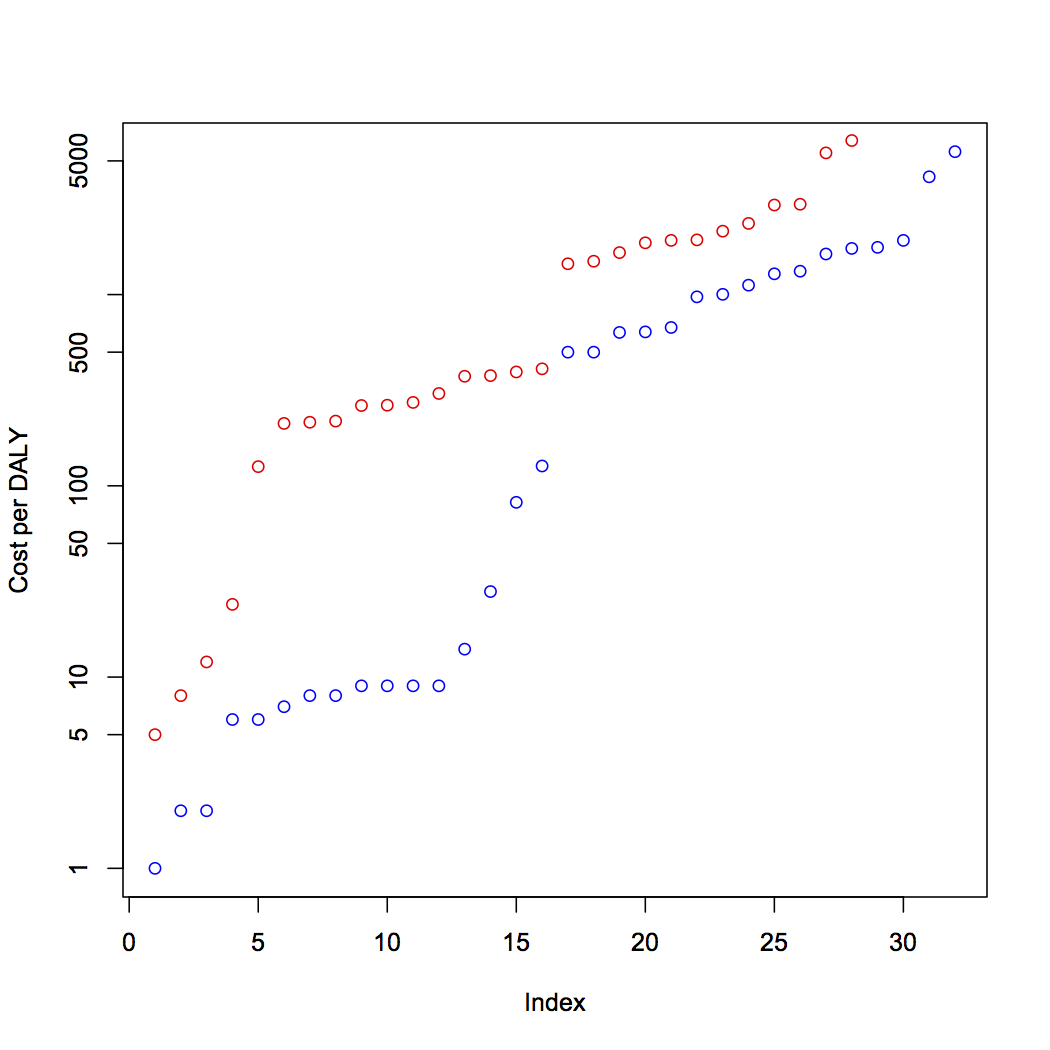 This looks sort of like what you’d get if you sampled from a log-normal distribution, but not quite. Unfortunately there are some problems with this data set:

What would it take to construct a true prior distribution? This would require having a large data set of random interventions where we have a fairly accurate idea of their cost effectiveness. It would probably take more work than compiling the DCP2 estimates since it would have to span a much wider scope. Perhaps a government or an organization like The Gates Foundation could construct such a data set if it put a team of researchers on the project for several years, but short of that, I don’t believe a project like this is feasible. So this approach is out. (Unless you want to do your PhD thesis on this topic, in which case I’m all for that and please send it to me once you’re done.)

Maybe we can build a theoretical model that tells us something about what we’d expect the distribution of interventions to look like.

At a naive first glance, an intervention could be anything you do that has an impact on the world. The universe is a big space and the space can be occupied by sentient beings that have positive or negative utility. So we can represent the universe as a vector where each element contains a real number representing the utility at the corresponding location in space.

The universe naturally changes over time. We can represent this change by multiplying the universe vector by a square matrix.

An intervention changes your little localized part of space and then potentially has effects that propagate throughout the universe. We can represent an intervention by adding 1 to some element of the vector.

We can find a theoretical prior distribution by looking at the distribution of utility differences when we change the elements of the universe vector. This distribution is the sum of a large number of uniform distributions, so it’s approximately normal. Does that mean we should use a normal distribution as the prior?

I don’t think so. This theoretical model is pretty coarse, and it covers the space of all possible actions rather than all reasonable interventions. There are lots and lots of things you could do to try to improve the world that you never will do because they’re so obviously pointless.

Let’s consider an alternative model where an action has some immediate impact, and then has effects that propagate outward multiplicatively. Here, if the effects propagate over sufficiently many steps, then by the Central Limit Theorem the final distribution will be log-normal. This is some evidence in favor of using a log-normal distribution as the prior.

One person I spoke to suggested that actions have some additive effects and some multiplicative effects, so the prior should look something like a combined normal/log-normal distribution. This is an intriguing idea worth further consideration, but I won’t discuss it more here.

We can estimate parameters by trying to figure out what’s reasonable a priori, and by picking parameters that produce reasonable results. The latter approach begs the question a bit, but I actually think it’s reasonable to use. You probably have strong intuitions about how to compare some interventions and weak intuitions about how to compare others. You can check your model against the interventions where you have good intuitions. Then you can think of the model as a formalization of your intuitions that makes it easier to extrapolate to cases where your intuitions don’t work well.

I have decent intuitions about, for example, how to trade off between GiveDirectly and the Against Malaria Foundation (AMF). GiveWell’s latest estimate (as of this writing) suggests that AMF is 11 times more cost-effective than GiveDirectly. The evidence for GiveDirectly is stronger, so I’d be indifferent between $1 to AMF and maybe $6-$8 to GiveDirectly. So I should choose parameters that get a result close to this. But I don’t have good intuitions about how good AI safety work is compared to GiveDirectly, so if I build a good model, its results will be more useful than my intuitions.

The median depends a lot on what your reference class is. Are you looking at all possible actions? Almost all actions are pretty useless. Maybe instead you should look at non-obviously-useless actions. This still includes things like PlayPumps, but I don’t expect I’ll be tempted to support most of these things.

So perhaps the reference class should be the set of all interventions that I might be tempted to support (with my money or time). It seems plausible to me that GiveDirectly is about the median for this set. I wouldn’t support anything worse than GiveDirectly on purpose, but a lot of things that I think might be effective probably aren’t that effective. Unfortunately, this decision is pretty arbitrary and I see no obvious way to make it more well-informed. Fortunately, the choice of the median doesn’t have as big an effect as the choice of the shape parameter.

The results for a Pareto prior scale xm such that the prior distribution has a median of 1.

The results for a log-normal prior use median 1 and vary the σ parameter. (σ in the prior represents the same thing as s in the estimate.)

This all assumes that we’re using a single prior for all interventions. But perhaps global poverty and x-risk are sufficiently different that we should use different prior distributions for them.

Now, I’m somewhat wary of using different priors for different interventions because it makes it easier to tweak the model to get the results you want, but I believe we can avoid this if we’re careful. Instead of changing priors based on whatever seems reasonable, which leaves lots of room for biases to creep in, we can change priors in a systematic way.

I believe the following system is defensible:

People care even less about non-human animals, beings in the far future, and sentient computer simulations. So we should expect on priors that these groups are easier to help.

GiveWell’s estimates suggest that it’s more than an order of magnitude more expensive to help humans in America than humans in the developing world.It’s probably reasonable to assume that it’s 10 times easier to help non-human animals than humans, since philanthropists care much less about non-human animals than about humans and animal advocacy receives far less funding than global poverty. We could use something like the following medians for prior distributions in different categories:

I have an intuition that the probability of observing an intervention with expected value 2X is a constant fraction of the probability of observing an intervention with expected value X, no matter the value of X. The only distribution with this property is a Pareto distribution. When I first wrote this post I felt that a Pareto distribution described the prior well, but after looking at the data more, I believe a log-normal distribution works better. I don’t find it plausible that I should be indifferent between $1 to AI safety and $94,200,000,000,000,000 to GiveDirectly7, as a Pareto prior suggests. And because of the shape of a Pareto distribution, you can’t fix this by reducing the variance of the prior unless you reduce it to an absurdly small number. On the other hand, this isn’t great reasoning and I have a lot of uncertainty here.

For a log-normal prior, choosing parameter σ = 0.5 and putting GiveDirectly at the median produces more reasonable results than other obvious parameter values. I will use σ = 0.5 in future essays that require using a prior distribution. Once it’s more polished, I will provide the spreadsheet I used to do these calculations; if you believe σ = 0.5 produces results that penalize high-variance interventions too much or too little, you can increase or decrease σ accordingly.

I believe the most difficult and important choice here is what distribution shape to use for the prior, and I do not believe any of the evidence I presented here is particularly strong. I’m interested in hearing any arguments for why we should use Pareto, log-normal, or something else.

Thanks to Gabe Bankman-Fried and Claire Zabel for providing feedback on this essay.